Phenylacetic acid (PAA) is the precursor needed for a high yield of penicillin G production according to the latest studies, so as per its importance, we are working on its local production.

Note on naming: alternative names for phenylacetic acid include:

Many methods are used for its production. Among them involves the acidic hydrolysis of benzyl cyanide, producing PAA and ammonium chloride as a byproduct (method 1).

According to the benzyl cyanide safety manual, this chemical is highly toxic. Therefore necessary safety precautions must be taken, such as personal protection equipment like gloves and safety goggles as well as appropriate ventilation and respirators.

Due to the dangers associated with this reagent, we are searching for other ways to synthesize PAA. 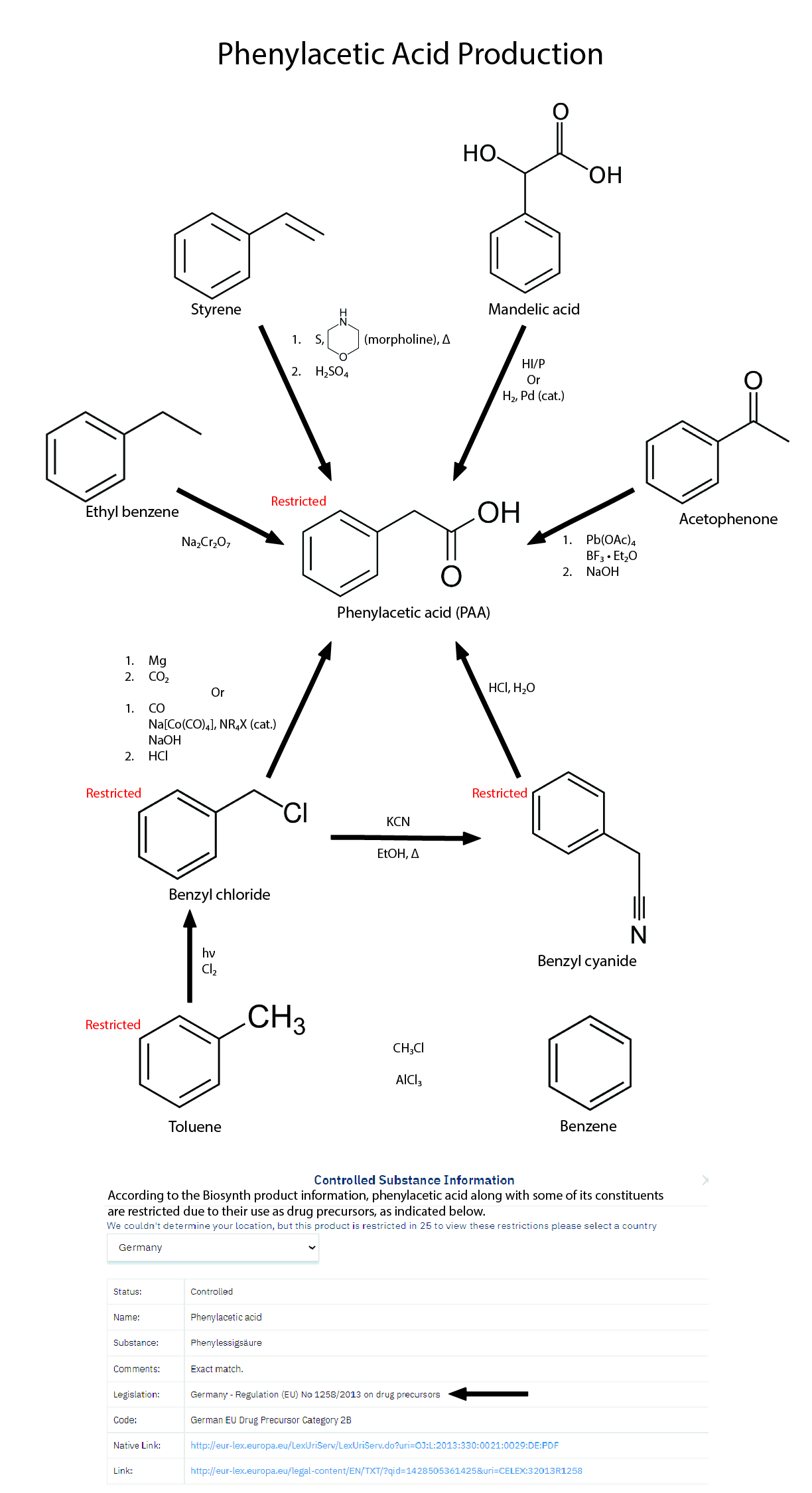 A variety of methods are illustrated by this patent. Though they use p-hydroxymandelic acid hydrate in their examples, they state that mandelic acid is a suitable starting reagent, albeit the substituted derivatives are especially preferred. The highest yield and simplest method is described below:

The Willgerodt Reaction can also be used to transform acetophenone (or styrene) to phenylacetic acid. See method 5.

The Willgerodt-Kindler reaction with morpholine transforms acetophenones and styrenes to phenylacetic acids, through the intermediate phenylacetothiomorpholide, which is hydrolyzed in acid or basic solution to the desired acid.

One run in which the original reaction mixture was concentrated under vacuum on the steam cone and then hydrolyzed directly with 50% sulfuric acid gave only a 59% yield of phenylacetic acid, m.p. 71-74°C.

Note: One of the byproducts H2S is extremely flammable and highly toxic, so necessary precautions must be taken to ensure it does not escape as a gas. Such precautions include utilizing a fume hood.

In order to compare the various methods according to cost, feasibility, and safety, we organized the information in the attached PowerPoint and have decided to move forward with the method involving mandelic acid, iodide, and phosphorous. This is due to the fact that not only is it the most cost efficient and has significant yield (90%), but also none of the reagents have any significant toxicity. Furthermore, the procedure is straightforward, and the apparatus required has multiple uses and can be used in the future for different applications.